Eleven months after the Freitas sisters made their debut at the Haymarket Music Hall, Sydney’s Evening News reported on this disturbance in the theatre:

Larrikin was a 19th-century Australian slang term for a subculture that developed among the unskilled urban youth in the inner city suburbs between 1870 and 1890. Larrikins congregated around the theatre districts of Sydney’s Haymarket and Melbourne’s Bourke Street — dance saloons or music halls featuring Cockney routines and American blackface minstrel acts were popular attractions. The “larrikin element” also appears to have been in attendance at balloon ascents as far back as 1872, invariably without paying the entrance fee.

The Online Etymology Dictionary defines a larrikin as “street tough, rowdy” (1868, Australia and New Zealand of unknown origin) and The Phrase Finder gives the earliest printed reference in H. W. Harper’s Letters from New Zealand, 1868: We are beset with larrikins, who lurk about in the darkness and deliver every sort of attack on the walls and roof with stones and sticks.

In Larrikins: A History, Melissa Bellanta says: Today, being a larrikin has positive connotations and we think of it as the key to unlocking the Australian identity: a bloke who refuses to stand on ceremony and is a bit of a scallywag. When it first emerged around 1870, however, larrikin was a term of abuse, used to describe teenage working-class hell-raisers who populated dance halls and cheap theatres. Crucially, the early larrikins were female as well as male.

Newspapers dedicated many column inches to the problem of larrikins; a search on Papers Past finds 18,775 results for larrikin, often reports from Australia or outraged letters to the editor such as this one:

But there was a darker, violent side to the Australian larrikin subculture. Some of the loosely composed gangs called “pushes” were involved in racist attacks on Chinese, battles and riots against police, murder and gang rapes — the most notorious being the Mount Rennie Outrage in 1886, the rape of Mary Jane Hicks by eleven members of the Waterloo push, after which four larrikins were hanged.

Friction with the police was exacerbated by the larrikins’ perception of being unfairly targeted. Ned Kelly referred to this in his Jerilderie Letter: the Queen must surely be proud of such heroic men as the Police and Irish soldiers as it takes eight or eleven of the biggest mud-crushers in Melbourne to take one poor little half-starved larrikin to a watchhouse.

Larrikins aspired to a “flash” sartorial style — high-heeled boots, flared trousers, bright-coloured scarves or neckties, a jaunty tilt to the hat — often caricatured in cartoons. Female larrikins or “donahs” were depicted as brazen, with flamboyant dresses and hats with a profusion of feathers. 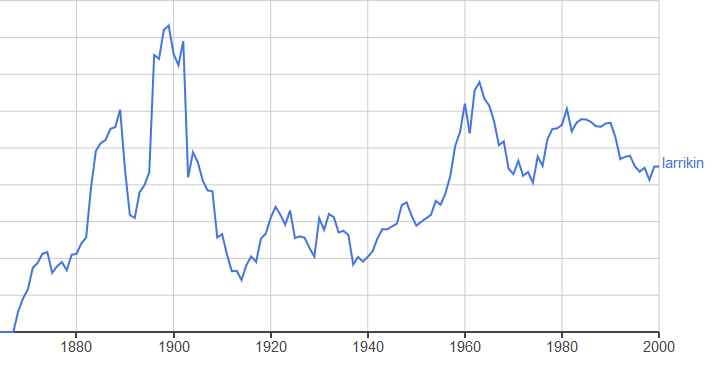 Around the time of the First World War, public anxiety about larrikins diminished and the meaning evolved into “a high-spirited person who playfully rebels against authority and conventional norms” — Starkie (the Anzac soldier in Passport to Hell), Paul Hogan’s Crocodile Dundee, and Steve Irwin are typical examples of this more “lovable larrikin”.