A thrill went through the expectant crowd, and a breathless hush fell as Lillian took the stage. She sprang forward, caught the bar that had been let down almost level with her shoulders and was carried aloft; up and over the heads of the people; up beyond the gas jets; up until she reached the trapeze that swung from the rafters. One light spring from bar to bar and there she was, supported only by her hands at that dizzying height — gazing down with a strange, daring, unreal smile at the sea of upturned faces below her.

Excerpt from Chapter 2, The Aerial Queen

From the moment Jules Leotard became a Paris sensation with his flying trapeze act at the Cirque Napoleon in 1859, trapeze acts were big entertainment drawcards in the 19th century — even more so if the trapeze artist was a woman in a skimpy, revealing costume. If the thrill was heightened with an extra frisson of danger, such as combining the trapeze act with a balloon ascent or being fired from a cannon, then so much the better. 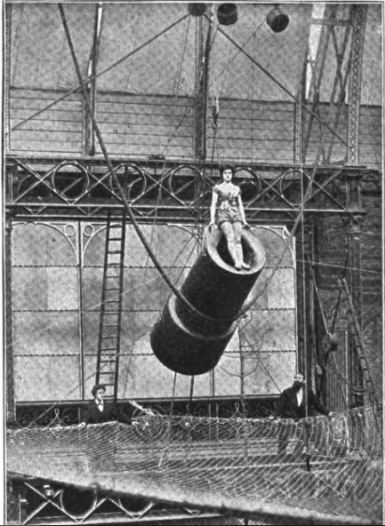 Leona Dare was famous for her iron jaw act, where she dangled from the trapeze with her teeth, she also performed her trapeze act from a balloon.

Zazel performed as possibly the first human cannonball, launched from a spring-loaded ‘cannon’ over the heads of the audience into a net.

Earlier Zazel’s manager, The Great Farini, had promoted the catapult act of Mademoiselle Lulu who performed as a woman but was actually Farini’s adopted son.

The debate about daring women performers intensified in 1863 when Selina Powell (The Female Blondin) died after a fall from a high wire in Birmingham and was found to be eight months pregnant. The public outcry in Britain eventually resulted in the watered-down Dangerous Performances Act, 1879 which prohibited children under fourteen from performing dangerous acrobatics.

Artists have long been fascinated by the circus. When I was researching 19th-century trapeze artists, I spent many hours online looking at paintings that capture the allure, drama and sometimes the isolation of circus performers. Last year, my week in New York coincided with an exhibition at The Met of Seurat’s Circus Sideshow.

Here are links to a few more of my favourite circus artworks:

The Family of Saltimbanques (Pablo Picasso, 1905)